Check out our Clearance section here

Check out our Clearance section here

We received great feedback from our last Exclusives blog post. A lot of you asked about the ColorStay Foundation line, so we decided to do a little research and bring you some much needed answers :) 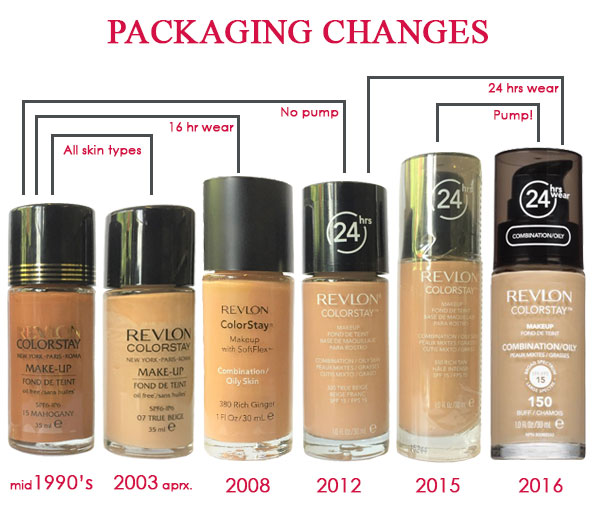 The timeline above is a visual representation of the changes in packaging throughout the years. As you can see, the ColorStay line has a long history and has gone through a lot of changes – some minor, other very drastic.

Let's break it down and look at them one by one!


There’s a mysterious ColorStay foundation that may or may not have been released in 2017. It was called ColorStay Stay Natural. The bottle was thinner and the cap had a round top.

The ColorStay foundation has gone through a lot of changes that has improved it more and more over the years. This collection is a good example of great product development. Revlon didn't just repackage the same formula and gave it different looks. They actually tried different things to improve the quality of the formula and handling of the product.

Which version of ColorStay is your favorite? Let us know this or any questions you might have here: community@buymebeauty.com

» Makeup Under The Mask: Tips & Recommendations
» Do's and Don'ts of Coloring Your Hair At Home
» Do The Beauty Safely: Tips and Product Recommendations
» This or That? Comparing products that are similar - Feb 2020
» 5 Cruelty-Free Brands We Love
×

Get the latest updates on new products and upcoming sales